Virage (ヴァラージ, Varāji, "Varaz") were living weapons used by the Winglies during the Dragon Campaign in the same way that humans used Dragons. They, alongside the God of Destruction, are part of the 108th fruit.

They are first encountered in Volcano Villude, with an incomplete form. Later, a second one is fought in the Valley of Corrupted Gravity with a complete form. During the course of the adventure, two more are battled, but these are Super Virage. Before fighting them, Shana is "called" by them, because of her being the Moon Child.

The Wounded Virage is encountered in Volcano Villude. It is the first Virage seen and fought by the party. It is awakened by the presence of the Dragoons or the Moon Child. It is unclear which. Both its legs and its right arm were removed at some point, forcing it to remain immobile or drag itself with its large left arm. Despite its disabilities, it is still a formidable opponent, and should be treated as the stronger boss in Volcano Villude. After the fight, Dart ends its life permanently by forcing the creature into the lava.

This encounter establishes Shana's connection to the Virage, though at this point in the story it is not known why. 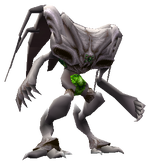 A Virage is once again fought in the Valley of Corrupted Gravity. He looks very similar to the first one. This time, the call is even more powerful than before, causing Shana to cower in fear and warn the party away from approaching it. It is awakened by the party and a battle commences. This Virage has a few abilities the wounded one was lacking, such as a more powerful laser and a very annoying attack that causes a character to die instantly, otherwise known as "Can't Combat". This form is fairly easy to defeat as far as Virage go.

The first Super Virage fought is found in the Wingly capital Kadessa. It is the same one seen in Rose's flashbacks of the Dragon Campaign. It survived Kanzas's suicide blast, although just barely, and survived in stasis entrapped in stone. When it is found Rose notes the large scar left by her comrade over 10,000 years ago and it begins to awaken due to the party's presence. Although powerful, it is still mortally wounded and horrifically scrambled and will die after ten rounds automatically. This Super Virage cannot use the powerful planetary attack a fully-fledged super Virage can use, nor can it safely use the array of lasers it could formerly use. However, if it is not defeated in 10 rounds it will use the laser array as its final attack. Using the lasers appears to destroy it.

The Complete Super Virage is a true monstrosity. It is extremely deadly, possessing a laser array for a left arm and massive cannon on the right. This, combined with a massive tolerance for punishment and high resistances to magic, makes it one of the most powerful foes in the game. It is encountered on the Moon that Never Sets.

Although it is a daunting foe, it can be defeated with persistence. Having Kongol in the party will make the battle much easier, since the Virage uses earth-based attacks. The last Super Virage is also one of the last obstacles to Dart and his company. It is found directly before facing Zieg. After the battle, Dart wonders if the Super Virage they defeated was, in actuality, Shana. Rose reassures him of this being impossible and they continue to the center of the moon.

Although the Virage are powerful weapons, they are mere cannon fodder compared to their stronger counterparts, the Super Virage. A Super Virage appears to be an entirely different species, or perhaps a normal Virage augmented with new armor and weapons. Whatever the case, they are many times more powerful than a regular Virage. The first to wield the dragoon spirit of the Violet dragon sacrificed his life in a large kamikaze explosion in order to defeat a Super Virage. They are capable of firing one large laser that acts and looks similar to a cutting torch, or firing several smaller but deadly lasers from their stomach. They can extend tentacles from their large left arm and constrict an enemy or they can use their right arm to condense the power of the stars to use as a weapon. They also simply smack an enemy with their left arm, as the Wounded Virage would do.

In battle, a Virage is composed of several attacking body parts. These parts are the Head, the Arm(s), and the Body. Each part is attackable, and each part can be destroyed, but the Head is the only part that the party is required to kill for the fight to end (except in the case of the final super Virage). Killing the Body does not kill the Virage itself, but it can make the fight easier by removing some of the Virage's attacks. The Arm(s) are the easiest part(s) to destroy, but they regenerate after a few rounds. Removing the arms can also remove some attacks that makes the whole battle a lot easier.

Virage have massive forearms and enlarged heads and clawed feet. They have the elongated feet common to four-footed animals and consequently what looks like a reverse joint on their knees, which are actually their ankles. All of this adds up to an alien appearance. Their wings are hidden from view most of the time, but are unfolded to fly. Their powerful legs jump them into the air, whereupon they tuck their bodies and legs under the wings.

Retrieved from "https://legendofdragoon.fandom.com/wiki/Virage?oldid=21906"
Community content is available under CC-BY-SA unless otherwise noted.