Tower of Flanvel, now half buried within a glacier, is a Wingly tower in Gloriano which was once both fortress and giant mobile war machine, capable of moving in aid of the five Wingly cities, and was used in the suppression and extermination of non-Winglies according to the orders of Melbu Frahma and his second in command, Faust.

Faust was Commander of the Tower of Flanvel when, like the cities of the Winglies, it floated in the sky. His magic was powerful enough that Frahma, fearing his disloyalty, created the Vanishing Stone to vanquish the apparitions Faust could summon; he has grown a little weaker over the years.

Faust's Tower was finally disabled by the Spear Shooter, a weapon designed by humans, based in Vellweb.

Uniquely designed with a maze of hollow spheres and linking them, tubes and glowing holes in the spheres that teleport to successive spheres. Lloyd, having gathered all three Divine Moon Objects, is prepared to fight to the death for the first and final time, at the top of the tower, wearing his new armor.

At the bottom of the tower is the Land of Taboo, which is a dilapidated section of tubes and crumbing pathways probably due to the bottom being damaged upon landing. The Vanishing Stone is required to enter this area. Faust makes this his home; here he plots becoming the new ruler of the world in an insane frenzy.

Outside, at the base of the Tower, monsters are encountered that are the same as in Kashua Glacier. Inside, in the first part of the tower, it counts as a Town; only scripted battles take place. Inside the Land of Taboo, there is a separate and unique set of Monsters

Lloyd has Queen Theresa hostage, as only her presence can open the Tower's concealment of Mille Seseau's Moon Mirror.

As Dart bursts in, the Divine Dragon's Spirit that Lloyd is carrying glows with Dart's sudden presence.

Lloyd declares his determination to release the final fruit of the Divine Tree at any cost. He believes that its superiority will make it capable of creating a better world for all Species

"The revolutionary plan created by the great will, Soa. And the flow of evolution woven by the Divine Tree. You Humans are merely the 106th in the plan. And...we Winglies are the 107th in the plan. I desire the 108th evolution! I desire a utopia created by the last species! For that, I will use every conceivable means!!"
Dart: "Lloyd, that's all you have to say!?"
Lloyd: "I'll let my sword say the rest. Shall we finish up!?"

Dart subverts the norm of him dealing the final blow by conforming to the norm of him fighting Lloyd, and misses while Lloyd darts away. Dart's swings away, intending to finish the battle, but Wink has entered during the battle, just in time to save her saviour Lloyd and get a potentially lethal sword slash across the back, doing it.

In the second part of the tower, movement once again accumulates on a counter, and battles start once it reaches a certain value. The enemies Basilisk, Madman, and Metal Fang, only spawn in the rooms past Faust's hologram, which only can be dissolved with the Vanishing Stone, giving access to the optional boss Faust. The Vanishing Stone is the final reward for gathering all 50 Stardust. 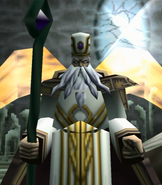 Melbu Frahma feared the abilities of his zealous minion Faust enough to create the Vanishing Stone
Add a photo to this gallery
Retrieved from "https://legendofdragoon.fandom.com/wiki/Tower_of_Flanvel?oldid=22780"
Community content is available under CC-BY-SA unless otherwise noted.