The Legend of Dragoon

The Legend of Dragoon

The Legend of Dragoon (レジェンド オブ ドラグーン, Rejendo obu Doragūn) is a role-playing game developed and published by Sony Computer Entertainment for the video game console PlayStation. It was first released in Japan on December 2, 1999, in North America on June 11, 2000, and on January 19, 2001 in Europe. It was re-released in PlayStation Network December 22, 2010 in Japan and May 1, 2012 in North America.

The game follows a young man, Dart Feld, on his journey through a world of magic, where ancient dragon warriors called Dragoons exist, to fight against evil forces who are threatening to destroy the world.

The main characters in The Legend of Dragoon are also the titular Dragoons. While there are nine playable characters and eight Dragoon Spirits, there will never be more than seven selectable characters at one time. Due to storyline events, Lavitz and Shana are replaced by Albert and Miranda, respectively. Both acquire the stats of the character they replace. The final party will consist of Dart, Rose, Albert, Haschel, Meru, Kongol, and Miranda.

Several villains are pursued over the course of the game but the two predominate ones are Lloyd and Zieg. These villains are also capable of using Dragoon Spirits: Greham, Lenus, Doel and Indora (which can also be achieved by buying from a merchant in Lohan previously) all use Dragoons Spirits in battle which pass on to party members after their defeat. Ultimately, the party fights Melbu Frahma as the God of Destruction.

The Continent of Endiness is the large landmass in which the game's epic story takes place. It consists of four countries: Serdio, Tiberoa, Mille Seseau, and Gloriano. There is also a desert-like region, which has an arid climate, known as the Death Frontier.

In the beginning of the game Serdio is split up into the Duchy of Basil (North of Serdio on the World Map) and Imperial Sandora (South of Serdio on the World Map) as Serdio is currently in a civil war. There are a few exceptions to this rule, for example the Village of Seles, which is controlled by Basil, but is in South Of Serdio. It has a temperate climate. This is the main area explored in the first chapter.

Tiberoa is the western country in Endiness, neighboring Serdio. Its ruling family consists of King Zior and the Princesses Emille and Lisa. It has a desert climate, only a portion of the country is inhabited, and most of its people have very dark skin and are overly celebratory of their ways. This is the main area explored in the second chapter.

Mille Seseau is the largest country situated at the top of the continent. This is the home of Dart, Shana, Meru and Miranda. Mille Seseau's capital is in Deningrad which houses a huge elaborate complex maze-like palace made out of fine clear crystal; the palace was formerly a part of a Wingly city. It has a very cold climate, especially in the winter, consisting mostly of forests and snowy forests, but not quite as snowy as Gloriano which happens to get more precipitation in the winter.

Gloriano (an entirely icy region) was the base of operations for the holy Emperor Diaz, who led the humans during the Dragon Campaign. It is also where Dart and his friends meet Zieg when he is under the guise of The Emperor Diaz himself. Gloriano and Mille Seseau are the main areas explored in the third chapter.

The Death Frontier is a desert-like region in the Continent of Endiness. The only location that is in this region is a Wingly City, where Melbu Frahma's older sister Charle talks about the five Signet Spheres and wants you to guard them so that The Moon That Never Sets will not fall and prepare the birth of the God of Destruction. The final chapter starts in Death Frontier and eventually ends at the Moon That Never Sets.

See also: Story of The Serdian War, Story of Platinum Shadow, Story of Fate and Soul and Story of Moon and Fate

The story begins when Dart, the protagonist, is heading home from a five year long journey to pursue the black monster, who killed his parents and destroyed his birth city, Neet. On the way, he is attacked by Feyrbrand, a mantis-like dragon controlled by the Sandora, a rebel faction in the Serdian civil war. Dart is saved by a mysterious female heroine named Rose, though they soon part ways. When he arrives at his hometown, Seles, he discovers that it has been destroyed by Sandora, and that Shana, Dart’s childhood friend (and later in the game, his love interest), has been taken away. Dart sets out to rescue her. Throughout the game, he is periodically joined by people that he helps along the way.

After rescuing Shana from Hellena prison, King Albert send the party to defend the fort-city of Hoax against attacks from Sandora. Among the attacking Sandora is Kongol, the last survivor of a race of giants known as the Gigantos. It is in his battle with Kongol that Dart first gains his ability to transform into a Dragoon using the Dragoon Spirit of the Red-Eyed Dragon. Kongol is injured, but survives and retreats. With the fort safe, they travel to the City of Lohan. In the city, they meet a man named Lloyd, supposedly the greatest swordsman in the world. Later they discover that he kidnapped King Albert and took the Moon Gem from him, an ancient artifact held by the Royal Family. The king is rescued, but Lloyd gets away with the Moon Gem.

They soon discover that Lloyd is gathering other artifacts held by human kings since the days of the Wingly Empire, and at the same time, causing disasters in the lands that he visits. While the party tries to reverse Lloyd’s work, Lloyd manages to obtain all three of the artifacts, and also manages to obtain the Dragoon Spirit of the Divine Dragon, the most powerful dragon in the world. Dart and the party finally manage to defeat Lloyd, who then agrees to take them to Emperor Diaz, ancient Emperor of Gloriano during the Dragon Campaign. Emperor Diaz reveals several things to the party.

During the height of the Wingly Empire over eleven thousand years ago, a creature called the Virage Embryo, also known as the God of Destruction, came to the world to end all other life. Before it could be born, the Winglies used their magical power to separate its body from its soul, making it unable to destroy them. They then cast the body into the sky, where it became the Moon That Never Sets, and sealed it using several magical Signets, one in each of the ancient Wingly cities, to prevent the soul and body from reuniting. The soul of the God of Destruction was originally placed inside the Crystal Sphere, which was worn by the ancient Wingly ruler Melbu Frahma to increase his power. However, during the Dragon Campaign, when the Dragoons assaulted Kadessa, the capital city of the Ancient Winglies, the Crystal Sphere was shattered during the fight between Melbu Frahma and Zieg Feld, leader of the Dragoons.

Ever since, the soul of the God of Destruction has wandered the Earth and, every one hundred and eight years, possesses the body of a human child in an attempt to return to its body. The body can be summoned if the Signets are destroyed, which can be done using the immense magical power contained within the artifacts that Lloyd gathered, called the Divine Moon Objects. At this time, the human that is the soul of the God of Destruction is Shana. Emperor Diaz then reveals himself to be Zieg Feld, Dart's father and leader of the Dragoons that fought alongside Rose in the Dragon Campaign. After Zieg defeated Melbu Frahma, Melbu cast a spell that both petrified him and kept Melbu's spirit alive within Zieg's body. Finally, it is revealed that Rose is the Black Monster that destroyed Dart’s village, in an attempt to kill the person carrying the soul of the God of Destruction.

After all this is revealed, Zieg (or, more accurately, Melbu Frahma, who is now possessing Zieg's body) takes Shana away and proceeds to destroy the remaining three Signet Spheres that seal the Moon That Never Sets, the flesh of the God of Destruction, causing it to fall from the sky and land on the Divine Tree. He then carries her to the body of the God of Destruction, so that the body will sense the presence of its soul and prepare to restore itself. Instead, Melbu Frahma unites with the body himself, taking the form and power of the God of Destruction. Zieg is released from Melbu Frahma’s possession, and aids the party in their attempt to defeat Melbu. The party defeats him, but at the cost of Rose and Zieg who sacrifice themselves to destroy Melbu Frahma. Everyone else is able to return home to live their own lives.

Revealed in a post by Shu Yoshida, a Legend of Dragoon sequel was put in pre-production after he left Japan Studio but was cancelled for unknown reasons.[1] Before this was revealed, many fan-based petitions were created on the web in hopes of a prequel, sequel or remake.

On January 21st, 2000 was a soundtrack released containing 50 tracks from the game. All of the tracks were composed by Dennis Martin and Takeo Miratsu.

About the same time as the game was released, a manga under the name "The Legend of Dragoon Manga" was released. It was not released outside Japan and hasn't been translated into English.

"The Legend of Dragoon Action Figures" is the name of a set of six action figures resembling Dart, Shana, Lavitz, Rose, Lloyd, and Kongol.

A group shot of all playable Dragoons

The Legend of Dragoon showcase

Statue of Shana for the showcase 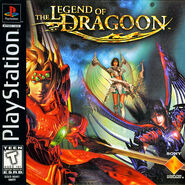 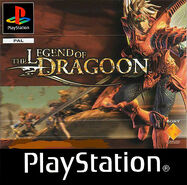 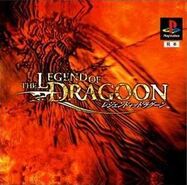 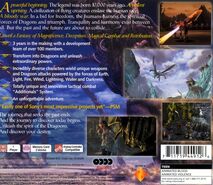 Back of U.S. version 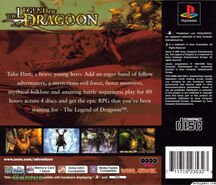 Back of European version in English 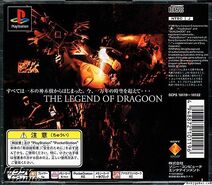 Back of Japanese version 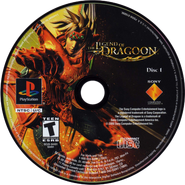 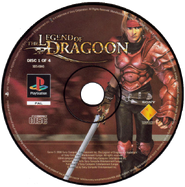 Disc 1 of the European version 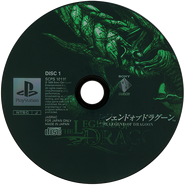 Disc 1 of the Japanese version 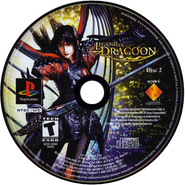 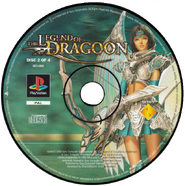 Disc 2 of the European version 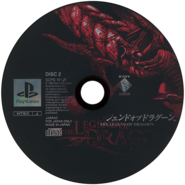 Disc 2 of the Japanese version 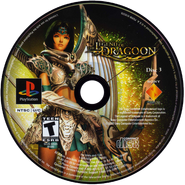 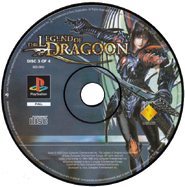 Disc 3 of the European version 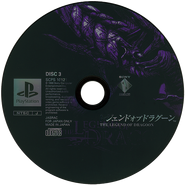 Disc 3 of the Japanese version 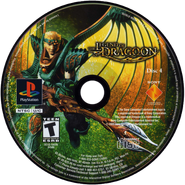 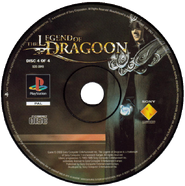 Disc 4 of the European version 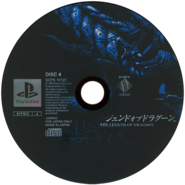 Disc 4 of the Japanese version