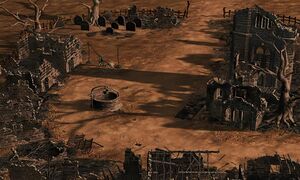 Seles (セレスの村, Seresu no Mura, "Village of Celes") is the second hometown of Dart and where he and Shana grew up. Thirteen years later Dart leaves to take revenge on the Black Monster and is gone for three years. When he returns, Seles is nearly destroyed, burned to the ground, and many of the townspeople dead.

The first Stardust can be found here. Collecting all the Stardust enables an optional boss late in the game, and gives access to powerful items, some of which cannot be obtained elsewhere

The second home of both Shana and Dart, in which they both grew up. Burned to the ground by Freugel and his minions, who considered this diversion a bonus they deserved for kidnapping Shana.

When Dart first makes it to the edge of the village, he finds two Sandoran troops attacking an elderly resident and stops them. The soldiers take him for a mercenary and taunt him with their plans to occupy and subdue the area. Finished with the soldiers he goes to the aid of the man, who explains that war has come, even to "such an outlying area" as Seles. He implores Dart to save Shana, but before he can tell Dart anymore, he dies.

Dart moves on to a burned down house where his friend Plos is lying face down. He helps Plos to the house and tries to find out what happened to the town. Plos explains that abducting Shana was the objective for which Seles was attacked; she has been taken somewhere. A Sandoran Commander and two soldiers confront Dart; the commander reveals that Shana was taken to Hellena Prison. Dart is indignant: "You attacked the village only to kidnap Shana?" "Exactly," responds the Commander, "but don't worry. We'll allow you to follow her. But not to Hellena." He raises his sword. "To Hell". The Commander rushes forward, into the first boss battle of the game. After the battle, Plos reassures Dart that the townspeople will rally. The two children in the ruins behind Plos enthusiastically respond to the plans to rebuild the town.

An optional tutorial on the timing system used for Additions can be initiated by speaking with Master Tasman near the exit to the Forest road.

Shana is shoved into her cell. The Man in Hood stands with Fruegel on a bridge in the prison. The Man in Hood has come from Seles to ensure Shana safety and secure custody; he refuses to satisfy Fruegel's curiousity about their prisoner. Fruegel tries in vain to assert his autonomy, but all he does is move directly in front of the oncoming train of the Man in Hood's authority. "Only his Majesty Doel can order me!" objects Fruegel. Fruegel seems to have missed the point of the Man in Hood's alliance with Doel. "Anyway..." says the Man. The word lingers over his dismissal of Fruegel's protestations. He moves on. "You must remember this." He strikes Fruegel to the ground. "If you make a scratch on her, it'll cost more than your head. This is a message from Emperor Doel." Fruegel relieves his frustration on a passing minion, hurling him into a dark abyss below.

The Dragoons return to Seles after the death of Lavitz. After a conversation, the Dragoons decide to go to Kazas to confront Emperor Doel

Enemies tend to spam spells when they are at <25% health, or when the indicator over their heads is "in the red". So it is even more crucial than in other games that the player correctly assesses whether there is ally HP enough to sprint to the finish, or whether some recuperation is needed first. This mechanic will catch some off guard, and the game never tells you, but otherwise it is a good test of judgement.

The game takes it easy on the player by dealing magic damage of the Element that Dart is strong against: his own element, Fire. So expect magic to get a lot stronger than this.

The battle is set up perfectly to reward optimists. Surely it should not be possible to Guard Dart's way to better health; because Dart has higher Speed than the Commander, though, it IS possible..as long as the Commander isn't in the red and spamming Burn Out.

Seles image created for the game and not used

Another part of the burned Seles 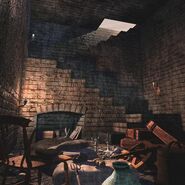 The basement of a building in Seles

Retrieved from "https://legendofdragoon.fandom.com/wiki/Seles?oldid=22728"
Community content is available under CC-BY-SA unless otherwise noted.