The Legend of Dragoon Wiki
Register
Don't have an account?
Sign In
Advertisement
in: Location, Disc 4, Hidden stardust,
and 4 more

Rouge is a location which can be found in the vast Rudra Bay, west of Death Frontier and south of Fort Magrad within the fourth disc of The Legend of Dragoon.

Rouge is a very isolated tropical island. It is the largest village of the islands near Rudra Bay, however small enough to be solely the "Rouge family". It is the hometown to Haschel, his daughter Claire, her friend Lily, Gehrich, the stardust collector Martel, and her daughter Lil. The structures here are all wooden. There is a dock and lots of wooden platforms so they can live to fish and train as they say they do continuously. Rouge is also the home of the Rouge style martial arts that rely on the users body to be the weapon. The ancient wingly city otherwise known as The City of Magic, Aglis lies submerged, just off Rouge's coast.

Once the Hero Competition had began in the commercial town of Lohan, that is when Dart had met with master Haschel for the first time in quite a while. As this character was introduced throughout the story within this city, you learned slightly more about him such as how he is the master of Rouge style martial arts, which originated from his hometown of Rouge. Also that he is still on a twenty year quest to find his daughter Claire who fled the village, so you learn about other inhabitants of that village. Haschel operated a martial arts school there for many years. He left 20 years before the story begins to find Claire.

Upon entering Fletz, Dart notices a plaque on the side of the bridge and comments on how it is named after a woman named Claire. He mentions this Claire Bridge specifically because he thought it was interesting since that was the name of his mother. This is the first moment of which Haschel thought there may have been some connection between them since he mentioned that his daughter also shared that name. This was of course in a joking way, however, it was still when his suspicions began and his journey after his daughter really began to cease.

Upon arrival to The Home of Gigantos, Dart and friends are immediatly engaged with the Gehrich Gang thugs such as Gangster. Haschel notices that their fighting stances are the same moves of which he taught to his pupils twenty years ago at his hometown. Immediatly he is confused and curious as to how these thugs could have been taught the Rouge style martial arts. After being asked, he is informed that their teacher is a runaway from Rouge, a master of the style, Gehrich.

The first time at the arrow trap, the heroes are trapped by bandits and forced to fight three of them, one of whom boasts about his Rouge School technique. Once the battle is complete, Haschel breaks the great stone door with that same technique.

Farther in, near the Rock Fireflies, Haschel prepares to deal with Gehrich. Haschel realises Gehrich is a pupil of his who had fled fromRouge and apparently began to live a life of crime as a gang leader, teaching his ways of fighting to lowly bandits. Haschel reasons that since Gehrich learned the Rogue martial art from him, all the trouble that the gang has wrought is Haschel's responsibility alone; therefore he must face Gehrich alone.

The others are going to search for bandits; Haschel stays to rest, saying he strained his back on the door. Meru gets in the way of his plan by insisting on waiting with him; in order to go on alone, he is forced to K.O Meru. Haschel hurries to confront Gehrich.

Haschel then attemps to show Gehrich how to express his heart through his fists by clashing again for final lessons. Upon his death, Haschel then goes to entomb him, which demonstrates a method to handle the deceased which may or may not be Rouge specific.

While spending the night at the residence of the mayor of Furni, Haschel who is still awake, over hears Shana humming a lullaby to Fa. As he listens, he can't help but notice it's the same lullaby passed down to his daughter Claire, which was passed down to him by his mother. He waits until she is finished and Fa falls asleep so that he could ask her where she heard that lullaby once she had left the room since it was only passed around to those from Rouge. She replied to him that Dart taught it to her, and that he had heard it from his mother Claire when he was still very small. He then leaves the building to get some air, realising to himself that it really can't be a coinsidence and that Dart's mother must actually be his daughter. This realisation also reveals that Rouge has it's own traditional lullabies of which they pass down throughout the generations.

They further explain the tragedy that had befallenNeet and in more precise detail. In a flashback from Dart, he see's himself escaping with his mother Claire Feld and fatherZieg Feld, from where his father tells them both to stay and that he'd go and fight for the village against the Black Monster. Shortly afterwards, Claire then tells young Dart to remain in his spot under the tree where it's safe and to live a strong life, she then goes on to saying how she will fight as well for the safety of their village and use her martial arts, then runs off. At this point you can assume that her fighting style is the Rouge style martial arts tought to her by her father Haschel on their home island Rouge 20 years ago when she was still small and training.

As the heroes discover their next destination, being The City of Magic Aglis,Haschel goes drinking throughout the night with Miranda and over does it due to excitement of happening to returning to his hometown, Rouge, even if it is only to pass through to get on their way. Along the way, he continues to point out that it is his home town and his familiarity with it.

Once they arrive in Rouge,Haschel is immediatly greeted by the mayor of the island who then goes on to inquire on who his companions are. He explains that they are friends not pupils and that he'd like them to get to know one another, however, their time is pressing and so they are asked to speak upstairs in the mayors house. Haschel commented on nothing changing a bit in the past twenty years, and they responded by stating that all they ever do is fish and train and sleep. Haschel had asked about their knowledge on an ancient city, as to point them in the right direction, however, the mayor did not know of such things, and so he began to explain everything. After hearing about it all, the mayor decided a world crisis is a terrible thing and that any information he had might be crucial, when they asked him about any structures that surely weren't human made he suggested with the assistance of a fisherman that perhaps what they seek is a certain stick surfacing out of the water on the side of the island. Apparently they cannot travel out there due to the whirlpools. To Haschels confusion, the mayor stated that it's a sudden occurence and that there is no way of him knowing about it.

As they go to check out the stick by exiting the house and going to the arena in the back, they see a tower like structure poking out of the water. They return to the big house when the ground starts shaking and the mayor runs out saying to Haschel that the ocean appears to be splitting in half forming a road. So they return to the training grounds to see. Once they realise that The Magical City Aglis has revealed itself to them, they now travel there by small boat.

To arrive at Rouge when travelling, you must go to the Twin Castle in Fletz and upon entering the main room you will notice two opened, wooden doors. If entered leads to the castle port from where you will enter the Queen Fury and sail towards Rouge. After the first trip there during the main quest, that is the only way to return there. So once you unlock Coolon, you will still need to ride the warship from Fletz to Rouge. In order to leave Rouge, the first time you arrive, you're forced to exit by entering The Magic city Aiglis and completing the story there, from where you will exit at The Law city Zenebatos. Thereafter you can return to the Queen Fury from Rouge and sail back to Fletz.

Once the player collects all 50 of the stardusts, Martel will give them the Vanishing Stone which can be used to destroy the hologram of Magician Faust located within the Tower of Flanvel. This will grant you access to the inner reaches of said tower, to new monsters, several new chests and to the optional super boss, the real Magician Faust.

Martel speaks of how she is sorry she doesn't have enough stardusts for Lil, however, Martel's daughter Lil's health is much improved by the collection of Stardust, but only when all 50 have been collected does she become permanently well. When all have been collected, she will thank you and state how Lil is now fine at long last and hand to you the Vanishing Stones. Although Rouge is her hometown, Haschel left when she was young and does not recognize the connection until the party visits Rouge.

There are no combat zones within this location so no enemies appear here, however, outside this location on the world map between Fletz and Rouge spawns several of the creatures from Undersea Cavern, as well as Rainbow Bird. All of which can be fought on the deck of the Queen Fury. 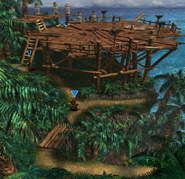 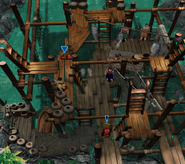 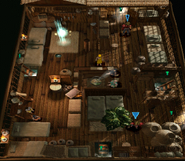 Rouge Back area
Community content is available under CC-BY-SA unless otherwise noted.
Advertisement