The Legend of Dragoon Wiki
Register
Don't have an account?
Sign In
Advertisement
in: Articles with hAudio microformats, Winglies, Playable characters,
and 2 more

Meru (メル) is the cheerful, perky young dancer girl who joins Dart and the other Dragoons in their pursuit of Lloyd to stop him from stealing all the Divine Moon Objects.

Meru is a Wingly girl with long back-length silver hair being tied in a high ponytail adorned with a large blue ribbon to display her unkempt full fringes and red eyes.

Her main outfit is a glamorous but revealing dress; a blue bra top with a gold trim which is connected with red straps similar to a shoulder holster, a shades of blue revealing skirt at the front skirt resemble a kilt and the back skirt is large that resembles a fairy wing with gold designs at the edge. She also wears red sandals with blue and gold straps. She also wields the long hammer to smack her opponents. She also has long wings hidden on her upper back due to her nature as a Wingly.

As a Dragoon, she resembles Damia the original wielder of the Blue Sea Dragoon Spirit and her Dragoon outfit is near identical to Lenus. She wears a blue strapless Dragoon armor leotard that resembles a strapless one-piece suit and was connected into blue two wires in each sides to show off the skin of her waistline. She also has blue Dragoon armor guards on both of her thighs as the straps are white and was connected to her knee guards and wears a blue Dragoon ankle-length armor boots. Her long hammer transforms into a giant Dragoon Hammer and was accessorized with long blue Dragoon gloves and her blue Dragoon headband resembles a segmented tiara. Her Dragoon wings are a translucent white with a shades of blue outlines. In her in-game the entire color is in the shades of deep blue and retaining the colors of her Dragoon wings.

Meru's idle animation has her putting her hands behind her head and gently rocking from side to side. When you control her in the Forest of Winglies she will not perform her rocking idle animation, but instead she will perform an impatient, stomping animation. Meru is one of two characters (the other being Shana) who has "fidget" idle animations: she does a wide spin in place.

When defending, Meru holds her hammer, mainly the pole over her face horizontally. When in Critical Health, Meru kneels down and slouches forward slightly while holding her hammer over her right shoulder. When dispirited, Meru stands straight with her knees slightly bent and her head spinning around as if dizzy; she also lazily leans against her hammer, with her hammer touching the ground as if she has lost the will to hold it up.

Meru is perky, cheerful, a bit childish, being especially spoiled around Dart. She also serves as a charismatic morale-booster for her team, after she joined the team even without the team's complete agreement. While she usually looks cheerful, she does have a serious side, as she shows at the Forest of Winglies upon returning home. Meru can be very upbeat, driving her party members insane, or boosting their mood at the right time. Her win animation also shows her clumsiness when she got tripped by her own hammer but only to perfected her actual win pose when she was in her Dragoon form.

Meru's choice of weapon type is a hammer.

Meru uses a hammer for armed combat. Her Wingly racial type and dancing skills gives her inhuman agility . Her magic offense and defense are the second highest among the Dragoons. However, her physical attack and defense are both low, as is her HP, with her HP being below all the other characters. Her additions are rhythmic and very fast, making one of the most fun characters. Meru's final addition, Perky Step, is often considered the hardest to master of all. Her Dragoon form maximizes her magical attributes, raises her speed by a decent factor and raises her physical attributes slightly. Due to her speed, she will quickly burn through her SP, reverting back to normal form. The same speed gets her SP back quickly though. Burning through turns in her Special is a good thing, though, since her Special gives no bonus for any other Dragoon. Once Meru maxes Perky Step, her low attack is mitigated by its high damage multiplier, thus becoming a very strong physical attacker. This, along with her superior speed and high magic attack make Meru the strongest party member, with one exception: Haschel at critical HP with Destroyer Mace equipped.

All of the attributes can be enhanced by Accessories, and their values are always shown as a total of the base value plus the bonus granted by currently equipped accessories. The value for the equipped accessories is never shown separately, but can only be inferred by choosing another item to equip

Speed is the first and foremost of the five attributes that are affected only by items; never leveling

It is hypothetically possible to hit 220 Speed by using the Dancer's Shoes, Dancer's Ring, and the Speed Up item, assuming Speed Up doubles the total Speed with Equip bonuses rather than the base Speed. Otherwise it would be 180. Either way, this combo will usually give her three turns right in a row and can be a good way to burn through Dragoon levels at the start of a boss fight, or to allow her to defend and recover HP quickly. It is also a decent way to level up her additions.

Meru joins the party at level 17.

Meru's Dragoon Spirit of the Blue Sea Dragon is the sixth (or seventh if you obtain Kongol's spirit from the Lohan merchant right after he joins the party) spirit obtained after the battle with Lenus and Regole. As Lenus dies, she throws her blades, almost hitting Dart and Shana. With her final attempt thwarted, she calls for Lloyd one more time and closes her eyes. A bright blue light shines over Lenus, rising to reveal itself to Meru, thereby signifying her right to rule dragons. With joy, she begins to dance before the other dragoons walk out on her. By transforming into a Dragoon, the Blue Sea Dragoon spirit glows at the center to form a block of ice which makes Meru breaks the block of ice with her hammer to transform into her Dragoon form.

As one of the most balanced Dragoons, The Blue Sea Dragoon offers healing and restoration with Rainbow Breath, along with three Water attack spells (2 for a single opponents, and one for attacking all opponents). Due to Meru's high base Magic-Attack stat (second only to Shana/Miranda), she is a wonderful healer, and attacker. Compared to her naturally low Attack stat (again, second only to Shana/Miranda), she gains a large attack boost in Dragoon form, as well as a large boost for her low Physical Defense.

Her dragoon magic is particularly useful against any enemy that causes status effects (ie. Polter Armor or Divine Dragon) as well as Bosses of the Fire element (i.e. Zieg, whom she can decimate in 3 rounds when properly equipped and utilized).

Meru first appears in the Flower City, Donau, where she is being apprehended by bandits. Meru claims one of them touched her butt because they were unable to resist how pretty she was. The bandits are dumbfounded at her statement, causing Meru to get upset. She believes they weren't taking her seriously, so she winds up a strong punch that strikes through two of three of the bandits, knocking them back a great distance. The bandits immediately question her naivety, only to find out Meru knew exactly who and what they were. Intimidated by her, they fled the scene. Dart and friends walk down from the mayor's home to find Meru chasing off one of the bandits. She is at first hostile towards them, pulling out her hammer and asking them if they were apart of the Gehrich gang. Albert notices she has the same hair as Lloyd; Haschel comments everything else about them is different. Meru continues to ask about who Dart's group could be, stating they were odd looking people. She asks for Dart's name, and returns her's, introducing herself as the best dancer in Donau. Rose recommends that they ignore her and continue their mission. Albert agrees, citing their objective to rescue Lynn. Meru overhears this and becomes overjoyed, explaining that she was going to rescue Lynn too, but then those bandits came.

Meru attacking a monster with her hammer in Dragoon form 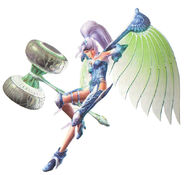 Meru in her Dragoon form 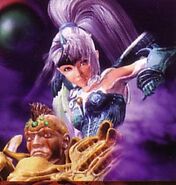 Meru (and Kongol) in a group photo

Meru and Kongol fleeing the Moon

Community content is available under CC-BY-SA unless otherwise noted.
Advertisement