The Legend of Dragoon Wiki
Register
Don't have an account?
Sign In
Advertisement
in: Boss, Articles with hAudio microformats, Non-playable characters,
and 4 more

Melbu Frahma (メルブ・フラーマ, Merubu Furāma) is the true antagonist of The Legend of Dragoon, although not revealed until the Dragoons confront and defeat the man whom they thought was Zieg, the man who defeated him eleven millennia ago, the Wingly dictator's grand plan spans 11,000 years and sets in motion the events of the story. 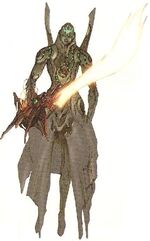 11,000 years ago, the Wingly leader Melbu Frahma personally kept the soul of the Virage Embryo, God of Destruction, in a Crystal Sphere, giving him absolute power over all living creatures from the Divine Tree, planted by Soa. His elder sister, Charle Frahma created five Signet Spheres in turn for him to keep the God's body, the Moon That Never Sets imprisoned in the sky. Melbu would later go on to create the Divine Moon Objects to destroy the spheres, thus allowing him to obtain the God's power further.

Frahma, according to the lore of present-day Winglies, was directly responsible for imposing on his people the genocidal directive of Wingly superiority over Humans and Dragons. Humans and Dragons had no right to live, he preached, and it was the mercy of the Winglies that suffered them to live at all, to slave for them.

His dictatorship over everything sparked the Humans, led by Emperor Diaz to fight against him and his army of Winglies in a war known as the Dragon Campaign. The original seven Dragoons, those found worthy to wield the power of dragons, would perish in the final assault on Melbu's fortress. Zieg,after stabbing Melbu in the heart, was instantly cursed by a powerful petrification spell by Melbu. At the same time, in order to survive beyond his now impaled and dying body, Melbu transmigrated his soul into the man's Red-Eye Dragoon Spirit.

Faust was Melbu Frahma's second in command, commander of the giant mobile weapon of Flanvel and a feared practitioner of magic whose powers surpassed Frahma himself. Faust's consciousness survived the millennia, remaining in the Tower of Flanvel. Faust could summon an apparition to do his bidding, a simulacrum of himself with most of his powers. Frahma feared Faust's power; suspecting him of disloyalty, he created the 'Vanishing Stone', with the capability of banishing Faust's double.

Melbu Frahma was defeated. His body was dead. His reign was over. Even those over whom he had ruled were defeated, and slaughtered or exiled; their cities would remain as rubble and ruin for millennia to come.

After over 10,000 years, the spell that bound Zieg Feld in stone finally failed, and Zieg was free to wander Endiness. He met Claire, married her, and settled with his new wife in Neet where they had their son Dart. When Dart was 5 years old, the Black Monster appeared and proceeded to destroy Neet and its inhabitants.  Leaving his family in where he presumed they would be safe, Zieg turned to face the Black Monster and attempted to use his Red-Eye Dragoon Spirit.  Melbu Frahma, who had implanted his own spirit inside the Dragoon Spirit, seized control of Zieg's mind and body.

Melbu Frahma, now in control of Zieg's body, made his way to Kazas and its Black Castle, finding the ruler of Sandora, Emperor Doel, a man whose morals were broken by his ambitions, and thus an easy target for manipulation. He met the idealistic Lloyd, finding his drive to undo the wrongs committed by Humans and Winglies alike to be a similarly fertile ground for his machinations. Together these minions of Frahma began to stoke the fires of war and unrest in the region; the Serdian War gave both a pretext and a means for Sandoran agents such as Fruegel to infiltrate the Duchy of Basil and other places. They went in search of the Moon Objects, to release the body of the Virage Embryo, and the mortal vessel of its soul, the Moon Child, that Frahma craved.

Luckily for Frahma, this coincided with the one time in 11,000 years that Rose had erred in her unceasing siege of the earthly manifestation of the soul of the God of Destruction, the Virage Embryo, and the dark Disciples that it made of those around it. Neet was merely one of the many places Rose had sought the Moon Child, and although she was later to find Princess Louvia in passage on the boat that bore her name, she could not know that the Princess had a foundling sister, and did not guess. Shana grew up completely unaware of the tragic destiny surrounding her birth and life, but Frahma could still sense her presence, and as she grew up, finding her became a greater and greater priority for the forces of Melbu Frahma, both great and small.

Throughout the battle, it can be observed that it's actually split across seven generations - shifting or skipping as the player fells each form of the boss. They demonstrate various stages throughout the timeline of the game's world and arguably, Soa's plan. Of these seven, Melbu shall be fought in three of them. An interesting fact is that these generations show an inspiration from aspects of religious stories, particularly the days of creation described in Genesis.

Fought in the Fourth Generation era

Do note, this monster will disappear if it becomes day or if the third form is defeated.

Fought in the Seventh and Final iteration of the world

Community content is available under CC-BY-SA unless otherwise noted.