Hellena Prison (ヘルライナ監獄, Heruraina Kangoku) is a prison on the southern coast of Serdio. A hellish place, feared throughout Serdio, it is known for cruel treatment of all prisoners and that those who come in, never come out. Lavitz Slambert commented that no normal person would be able to survive in such a place. However, Hellena Prison is not only infamous for its cruelty, but also for the fearsome monster that lives there; Jiango. During the adventure, Hellena Prison is visited by Dart and company twice.

A Friend in Hellena Edit

The first time Dart enters the prison, he does so discreetly by hiding in a incoming supply wagon. As he leaves the first room, a merchant catches him and immediately calls for a guard. After the guard is defeated, Dart explains he does not want to kill the merchant. The merchant then offers to keep quiet and sell Dart some of his supplies.

Dart arrives at the first floor cells and hears fighting noises. He rushes over and discovers Lavitz fighting off guards to secure the safety of other captured Bale soldiers. Dart joins the fray but is taken for an enemy by the surprised Lavitz. More guards arrive, forcing the duo to guard each other back, forming a quick and lasting bond. After the battle, Dart explains that he's looking for his childhood friend, Shana. Lavitz decides to go with Dart, declaring that it will be hard for one man to survive Hellena alone.

Dart and Lavitz eventually come to a large room filled with guards. They locate the key to Shana's cell, in the room's upper section. While investigating the area near Shana's cell, they are caught by a large group of guards and a battle ensues. Through the fighting, Shana is able to hear Dart's voice and calls to him. Dart enters the cell as Lavitz stands guard and he and Shana have a intimate moment. As they exit the cell, more guards arrive and another fight begins.

Once the battle ends, Shana says she wants to help too; she declares that she isn't the same helpless girl Dart remembers. Now with Shana, the group returns to the first floor but are soon confronted by Warden Fruegel. Fruegel explains that the orders to capture Shana were issued by the Emperor Doel of South Serdio, but he added the order to destroy Seles. Angered, the trio begins an intense fight with Fruegel and his minions.

Fruegel is extremely tough and the party is unable to kill him. The party narrowly escapes the prison, and flees to the Prairie. As they escape, Fruegel sends men after them. The previously seen "Hooded Man" scolds Fruegel for losing the prisoner and sends Fruegel off after his minions.

Finally alone, the "Hooded Man" whispers that everything is going according to plan.

The second time the player enter he/she will have an even bigger team and some Dragoon Spirits also. Head again toward the way that was previously blocked by guards only to be ambushed and forced to fight Jiango whom the heroes are supposed to be food. After the battle the player can open the secret passage and start to head toward the top to stop Freugel from killing King Albert. Once at the top the heroes fight Freugel again with his two pets.

The heroes see that the hooded man is behind King Albert removing something from his back, the Moon Gem. Lavitz turns Dragoon and attacks the hooded man which ends up being Lloyd, who in turn kills him with the Dragon Buster. After his death King Albert acquires the Jade Dragoon Spirit, and they flee the castle back to Seles.

There is a Merchant selling items on both occasions. This is the first shop selling Angel's Prayer. (Multi) items can be boosted in damage by repeatedly pressing the action button.

On the road to the prison.

The drawbridge leading into the prison.

A place inside the prison where Dart and friends later encounter Fruegel face to face for the very first time.

The first room inside the prison where Dart can move freely.

Road inside the prison leading to a elevator. 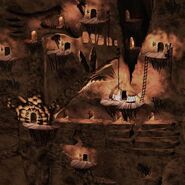 An area with multiple doorways that are leading to each other.

Another section of the heavily guarded prison.

An area with multiple floors, leading to different places of the prison.

Inside the Hellena Warden's quarters.

Hellena Prison on Map
Add a photo to this gallery
Retrieved from "https://legendofdragoon.fandom.com/wiki/Hellena_Prison?oldid=23267"
Community content is available under CC-BY-SA unless otherwise noted.