Haschel (ハッシェル, Hassheru, lit. "Haschel") is one of the heroes of The Legend of Dragoon. He is the Master of the Rouge School of Martial Arts and the new Dragoon of the Violet Dragon which controls Thunder-based attacks.

He learns towards the end of the game that his daughter Claire was Dart's mom and died in Neet. In a twist of fate or irony, he actually meets his grandson Dart years before the game's events take place when they traveled together on an adventure without knowing of their relation.

Haschel is a near elderly martial artist with long dark gray hair and his eyes are squinting if not closed. He wears a thin laced headband.

His outfit is a purple sleeveless martial arts garb with black designs and a black spike design at the back and a red belt which tuck into his garb, purple martial arts pants and black boots. He also wears red wristbands in both of his wrists.

As a Dragoon, Haschel resembles Kanzas the original wielder of the Violet Dragoon spirit as well as his Dragoon form.

In his in-game while in this form, the color of his pants changed to beige and the accents from his armor becomes sky blue and his dragoon wings appear as sky blue, pale yellow and violet with sky blue outlines.

In the end of the game where they escape from the Moon with Dart and the group, the white accents on his Dragoon form changed to green.

Outside the battlefield, Haschel is upbeat and jovial, even throwing in some jokes while in conversation with his friends. In battle, however, Haschel is serious, calm and collected.

Haschel is a martial artist, which means he is an expert in using his fists and kicks as weapon. His attributes are geared more towards offense, as opposed to defense. Haschel possesses high attack, magic attack, and speed which are roughly equal to (or slightly higher than) Dart's. However, his HP, Defense, and Magic Defense are a bit low. His additions are not too fast or slow, but the timing of them is unusual making some of them easier to use than others. His Master Addition, Omni Sweep, is the most difficult Master Addition other than Meru's Perky Step. His dragoon form makes him a brutal front line fighter both physically and magically. He is also extremely swift, which makes his dragoon form the deadliest fighter along with Dart - only Haschel is more Physical based. His Dragoon, along with Dart's, will easily annihilate any enemy encountered.

As with Meru Haschel can get extremely high Speed (agility). Using the Speed Up item, Bandit's Shoes, and Bandit's Ring Haschel can almost assuredly get 3 turns in row. It is hypothetically possible to hit 200 Speed, assuming Speed Up doubles the total Speed with Equip bonuses rather than the base Speed. Otherwise it would be 160. Meru, with 10 more Speed, would have 20 more, and Shana with 5 more, 10 more. They use the Dancer's Ring and Dancer's Shoes instead.

This can allow for some serious damage done to a boss at the start of a fight, especially if used in conjunction with his Dragoon Special. It can also be used to quickly heal by defending or leveling up additions at a fast pace, being that he has the second most to level up in the game.

All of the attributes can be enhanced by Accessories, and their values are always shown as a total of the base value plus the bonus granted by currently equipped accessories. The value for the equipped accessories is never shown separately, but can only be inferred by choosing another item to equip

Speed is the first and foremost of the five attributes that are affected only by items; never leveling

Entirely subject to correction, the level Haschel may be at when he joins the party: thirteen.[1]

While weapons are always for one Dragoon, Armor is usually for more than one. Like Kongol, none of the body armor that Haschel can wear can be worn by another Dragoon, except for the Armor of Legend that everyone, male and female, can wear. Like Kongol, he has one helm that he alone can wear. There are no restrictions on boots other than Male and Female.

Only Haschel can wear this helm:

These are body armors that can only be equipped by Haschel, in order of their defense:

Haschel's Additions really do do more damage than Dragoons; the common wisdom is that this is true of all characters, but it is not. Haschel's first addition has as strong a bonus as Dragoon form. Only Summon Four Gods has a lower bonus, and Omni Sweep is two and a half times stronger. There being no Elemental weakness to Thunder, even the elemental bonus from a Perfect! Dragoon Addition gains him nothing, although he can lose 50% damage against Thunder element enemies, which are thankfully few.

Dragoon levels will take a little longer with Haschel. Double Punch's max of 50 SP and Flurry of Styx's unchanging 20 SP are relatively low. And it will be a bit of a wait if the player moves on from Summon Four Gods and its maximum of 100 SP; the next two additions are even worse than the first two, at 50 and 15. 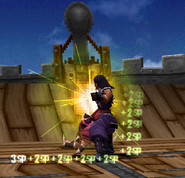 Add a photo to this gallery

The Violet Dragoon Spirit, the fifth spirit received, is acquired after the battle with Doel. With the death of Doel, Dart decides to follow Lloyd to Tiberoa . The other dragoons, Rose, Shana, and Albert, agree to go with Dart as it is "fate." Haschel begins to walk away but a bright light shows to reveal his "fate" and so he heads to Tiberoa with his fellow dragoons.

Haschel's Thunder Magic is exclusively single-target damage. Thunder Element, and therefore Haschel himself, is strong against no other element. It is weak against Thunder element targets. Usually Dragoons have some damage advantage, but Haschel's additions get more damage bonuses than his Dragoon form: Omni Sweep is two and a half times stronger. And Haschel has nothing to gain and half his damage to lose from his elemental magic, given that there is no Elemental weakness to Thunder and a few Thunder element enemies about.

The developers put a large number of hints and clues into the game that point to Haschel's runaway daughter Claire being the same Claire that became Dart's mother.

At the beginning of Disc 2, first entering Tiberoa, one of the party notices that one of the town's bridges is named Claire Bridge. Dart says that is his mother's name, and Haschel says that it is the name of his daughter, who he began looking for 20 years ago, after she went into self-imposed exile for possibly killing one of his Rouge School students. The group speculates that these might be the same Claire, concluding that they are not, based on the fact that the two look nothing alike. Haschel does not say anything, but later flashbacks show that Claire also looks little like him.[1]

Early on Disc 3, At the mayor's house Haschel listens as Shana sings a lullaby to their (mayor) host's child, and reflects that Claire once sang the same tune and declared that she would sing it to her future child. Shana tells Haschel that Dart used to sing it to her. Dart and Shana later reminisce about the song, confirming its source as a song Dart knew from childhood, giving the first real clue of the relationship of Dart and Haschel.[1]

Haschel tells Dart that Dart resembles Haschel as a young man near the end of the game.[1]

One more equivocal clue, weighing more on the side of Haschel as grandfather: On Disc 4, on The Moon That Never Sets, Haschel tells Dart that he must give Haschel and Claire privacy to talk, because Claire does not know about Dart yet (As she has yet to give birth to Dart in her current time) admitting that he now believes Dart to be his grandson. [1]

We, the audience, want Haschel to be Dart's grandfather. It is an interesting plot twist, there are two people we care about who are related, were separated by tragic circumstances, and can now be reunited. But does Haschel want this? He has been on a journey to find Claire for twenty years, always hoping that he will find her. He has heard Dart's story, he knows what happened to Dart's Claire. If that is his Claire too, then she is dead. All his searching was in vain, and his daughter is dead. It is no wonder that it takes a little more than two people having the same name to convince him.

Retrieved from "https://legendofdragoon.fandom.com/wiki/Haschel?oldid=23500"
Community content is available under CC-BY-SA unless otherwise noted.