Fruegel (フリューゲル, Furyūgeru, "Furyugel") is the head warden of Hellena Prison, he is feared by most because of his immense size and power that he shows throughout the battles. He has major problems controlling his anger, thus it is shown many times that he kills his own men, or bullies them. Fruegel is said to be immune to all Status Ailments, despite guides indicating he is vulnerable to Stun.

Fruegel is given the order from Emperor Doel to obtain the girl named Shana from the small outlying village known as Seles. Emperor Doel himself does not know the importance of the girl, as he is only following an outside influence. Brutish Fruegel is not content with only kidnapping, giving orders to take the girl and destroy the village as well. This was revealed by Fruegel in Hellena during the first fight, then again confirmed by the Great Commander in The Black Castle.

The first time meeting Fruegel is just at the exit/entrance of Hellena after Dart have rescued Shana, and are escaping. They battling him and then steal the horses beside him. In the first battle he has 90 HP, with Dart hitting for 9 or so if he finishes his Volcano Addition and Shana hitting for 5. Like most bosses, Fruegel counters Additions much more often than most normal enemies.

Fruegel has two sets of minions to guard him in the first battle. Two of the common Hellena Wardens start at his side, and until they are defeated, Fruegel cannot be targeted with attacks. When both are defeated, up run the next pair: the previously unseen Senior Wardens, with their final attack spell.

The second time you actually encounter Fruegel is after the Invasion of Basil when you go back to Hellena Prison, to rescue King Albert. However, you must defeat his much feared and much talked about pet monster, Jiango, before you fight him. During his second encounter you fight him and his other, weaker pet monsters: the grand avian Rodriguez, and the demonic dog Guftas. Both pets have one attack that they can use on their own without the command of their master.

At 1,120 HP, Fruegel has more HP than Rodriguez and Guftas put together (960), but only a little bit more (14%). If you can withstand the damage output of all three for twice as long, then you can end the fight in roughly half the time: If Fruegel is defeated before Rodriguez and Guftas, they will run away in fear, ending the battle.

If that is too much damage, or for too extended a period, then this is your chance to play around with Status Ailments. Fruegel is immune, but Rodriguez and Guftas are vulnerable to ailments and Can't Combat. You might even be able to use a Total Vanishing!

Fruegel can use a variety of attacks now including commanding his pets to attack. He has three regular attacks where he chops an ally, throws a boulder at them, or uses his club to attack.

Guftas is Fruegel's pet dog. He wears a helmet that is similar to World War Two Nazi replica helmets, only with the spike on top from World War One German helmets (motorcycle gang bikers were the first most commonly recognized wearers of helmets with this combination of styles). When called by his master to attack, he howls to Confuse one of your party members. 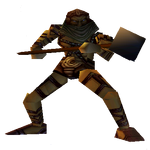 These Hellena Wardens have slightly higher HP but are the same in all other regards. They can be taken out in a few turns. It must be noted that before both are killed, Fruegel can't be attacked. Once both are taken care of, Fruegel will summon two Senior Wardens to keep fighting beside him.

Senior Wardens first appear when fighting against Fruegel the first time in Hellena after the two Hellena Warden Fruegel called "wimps" were defeated. They will attack your allies with double voulge. After their defeat, they will cry "Huh, I may as well take you to hell with me!" and throws a Gushing Magma on you. A few turns after the first Senior is defeated, the second will power up and will only take half its normal damage. To counteract this, it is suggest to attack both wardens at the same time so that once the first is defeated, the second can be killed immediately after. Under speed-running conditions, it is possible to kill Fruegel before he summons them.

Frugel calls reinforcements
Add a photo to this gallery

Retrieved from "https://legendofdragoon.fandom.com/wiki/Fruegel?oldid=22672"
Community content is available under CC-BY-SA unless otherwise noted.