The Legend of Dragoon Wiki
Register
Don't have an account?
Sign In
Advertisement
in: Articles with hAudio microformats, Location, Disc 1,
and 3 more 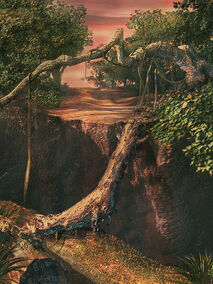 Many creatures in the Forest have the extremely high Magic Defense stat of 120, much higher than other creatures on Disc One or even Two. Presumably this is to guard against massive overkill, should players go back to areas at the very start of the game to see how much damage they can deal.

A Friend in Hellena[]

Dart must travel through the Forest in order to get to Hellena Prison which is on the west side of the forest. Half-way through, Dart runs into a dog that reminds him of when he protected Shana from a dog like creature that attacked her in the forest when they were children.

There is a Merchant to the left at the first visit in the forest. In a slightly different way than Master Tasman gave his tutorial, he can teach the player about using items in battle. This technique of presenting dialogue is sprinkled through the game and a little heavier at the start.

He claims that Elemental items do double damage against targets of the opposing element.

The Healing Items and Attack Items listed in the table are available in the shop. (Multi) Attack Items can be boosted in damage by repeatedly pressing the action button.

The entrance of Forest from the village Seles

The middle section of the forest; a fallen tree is lying over a ravine, creating a bridge

The maze in the forest 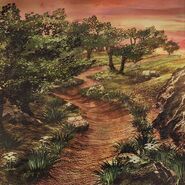 The end of the forest

Forest on map
Community content is available under CC-BY-SA unless otherwise noted.
Advertisement