For magic, whether Dragoon Magic or Attack Items, three pairs of Elements are opposed to each other and do more damage to each other. Fire damages Water more, and is damaged by it more. Wind and Earth do more damage to each other. Light and Dark are similarly opposed. Thunder takes more damage from no other Element and has no bonus, and neither does Non-Elemental. All of the Elements do less damage to their own Element except No Element. The values are often given differently by the community, but the closest thing to a consensus seems to be 150% of normal damage against an opposed Element and 50% of normal damage against the same Element. There is some evidence to suggest that elemental Weapons do double

There are quite quite a few multiple element bosses. Complete Virage is No Element but not its attacks; they are either physical or Light. Last Kraken has Thunder, Light and Water attacks.

There being no other ordering for elements relevant to any other part of Legend of Dragoon, the Element sections appear in the order in which the Dragoons or Characters that later become Dragoons of that Element appear in the game:

Fire and Water do more damage to each other. Fire does less damage to Fire.

The Red-Eyed Dragoon Spirit chose Zieg Feld as a Dragoon during the Dragon Campaign; Rose awakened it to choose Dart, who unbeknownst to her was Zieg's son.

All non-boss enemies in the second infiltration of Hellena are Fire, in order to prevent Dart obliterating everything with Dragoon Magic

19 enemies, 15 of which are before Meru joins the fellowship. Non-boss Fire enemies have lower Magic Attack than other Elements: maximum of 86.

Fire has probably the highest number of Collision Encounter enemies, and certainly the highest ratio. Other than that there is nothing special about their XP, especially compared to the Unique Monsters.

Dark damages Light more, and is damaged by it more. Dark does less damage to Dark.

Dark Dragoon Magic has more different types of special effects than any other and is tied with the Light Dragoon for a total of three; corresponding perfectly with her role as a warrior master eventually surpassed by her proteges, her final Dragon spell does only damage.

Wind and Earth do more damage to each other. Wind does less damage to Wind.

Rose Storm is widely regarded as the best Dragoon power. There will even be occasions (especially Fruegel and other Earth bosses) when it will be beneficial to start a Special with it, although it wastes a turn of bonus damage. Often best to get the extra damage on another Dragoon, and do Rose Storm second or third.

Light damages Dark more, and is damaged by it more. Light does less damage to Light.

Light Dragoon Magic is tied with the Dark Dragoon for a total of three spells that have special effects; all three heal allies. She has no single target damage spells and the fewest damage spells; both are targeted at all enemies.

Earth and Wind do more damage to each other. Earth does less damage to Earth.

Kongol has three Dragoon Magic spells where everyone else has four; all 3 of them target all enemies on the field.

Kongol has no elemental weapon

Thunder takes more damage from no other Element and has no bonus.

Haschel's Dragoon Magic targets only single enemies; unsurprisingly his third magic is tied with Dart's for the highest damage to cost ratio on a single target

Water damages Fire more, and is damaged by it more. Water does less damage to Water.

Meru's Dragoon Magic has the highest damage for a spell targeting all enemies, outside of final attacks. Her Rainbow Breath is a frugal alternative for healing allies, acting as a Healing Breeze to Shana's Gates of Heaven, the equivalent of a Healing Rain.

Meru has no elemental weapon.

There are a total of four enemies, out of the scores of monsters in the game, that are weak to Meru's Water. Diamond Dust makes up for it with its 50% All for 30.

No Element does not take more damage from any other Element and has no bonus, and neither does Thunder. No Element is the only one that does normal damage to its own Element type.

Element Dimension proper appears when using "Special" command. Unlike Dragon Summon, Special has 8 types of Dimensions and grants advantages for the Dragoon who unleashed the special; Dragoon magic and physical power increased by 50% and he/she will have completed dragoon additions without using the "Dragoon Spirit Time Dial".

Element Dimension effects appear when using Dragon Summon Magic, one for each of the Dragons summoned by the final Dragoon Magic. The consensus so far is that this is only a visual effect and has no effect on damage. 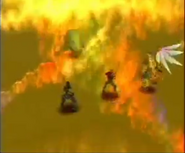 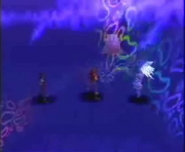 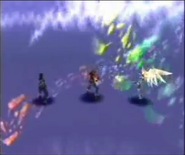 Divine (No Element) Dimension
Add a photo to this gallery
Retrieved from "https://legendofdragoon.fandom.com/wiki/Element?oldid=23384"
Community content is available under CC-BY-SA unless otherwise noted.