The Legend of Dragoon Wiki
Register
Don't have an account?
Sign In
Advertisement
in: Location, Collision Encounter, Death Frontier,
and 3 more
English 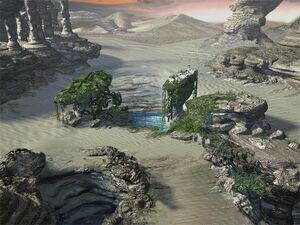 Death Frontier is a large desert in the center of Endiness. The dragoons travel here after confronting the man calling himself Emperor Diaz. Rose leads them here, the only route to Ulara. The Dragoons require extensive knowledge of The Moon That Never Sets, and Ulara is the only place in Endiness where that may be found.

There is a Save Point at the start of the maze, and at Oasis areas. Oasis areas also have a healing pool, and there are no monsters. The Death Frontier offers advantages for leveling up characters or gaining coin, and is the last opportunity to do so while still being able to spend the money in say, Lohan afterwards, until the Coolon transport in Zenebatos

There are no shops between Primero and Quatro in Vellweb, and the shop in Ulara.

Beginning of the End[]

The Dragoons are all still dumbfounded at Melbu Frahma's revelations. Albert compares the hidden nature of the caverns under the sand he believes were created when water receded from this desert, and their quiet solitude, with the sad but merciful ignorance of the outside world to its apparent doom. "The world is still going on without knowing anything. Without knowing, until the end...I wonder if this little world has experienced an end like that." Dart insists on optimism, with irrefutable logic. "It is not determined yet that our world will end."

Rose is understandably having difficulty adjusting to the change from being solely responsible for the fate of the whole of Endiness. 11,000 years of there being no one else who could help was also 11,000 years of evidence that there was no need for anyone else to help. She tries to give them the "no one will be blamed if they can't go any further" speech, but it comes out as dissuading them from coming. Miranda is determined to help, to the point of insisting on it. Rose fails at establishing the relative difficulty of the task ahead, in that she diminishes the importance of what they have done so far. "It's not as easy as pursuing one Wingly", she says. Miranda loses it, and slaps Rose. Albert must pour oil on the troubled waters. "Nobody can understand the weight of fate you have carried. But we can at least lighten the burden for you."

The Death Frontier does not have random battles; instead it is like the Phantom Ship in that monsters appear on the map with you and making any sort of contact with them initiates battle. Monsters respawn again after each battle (except for Cactus, which requires a screen change). This area is recommended for power-leveling (for example characters commonly left behind such as Miranda, or difficult areas of a character's development such as Kongol's Dragoon Level), as Sandworms often enough appear alone and can take a lot of abuse. Other 'touch-based' enemy areas include the Phantom Ship, the Spinningheads guarding the Dragon Block Staff in Kadessa, Black Castle, both visits to Hellena Prison, and the magma pool in Volcano Villude.

Road between Death Frontier and Ulara:

For many, the layout of this desert is confusing and hard to navigate. Here is an image of the map, and how to get to the treasure chests below ground.

Note letter "E" is not an item, but a healing pool similar to the one found in the Nest of Dragon. There are also two letter "H" shown, but only the one next to letter "I" leads to an item. 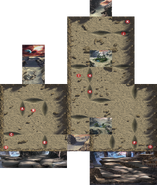