Charle Frahma is Melbu Frahma's older sister. She is more peace loving than her brother and is more friendly towards Humans and other species. She currently residing in the Spring Breath Town Ulara. Charle also gave Rose the choker that she currently wears so that she would not age. 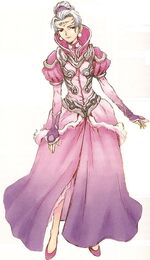 Before the Dragon Campaign, Melbu Frahma created the Crystal Sphere, which gave him immense power to control the other species. Charle Frahma, out of desire to stop Melbu from being a dictator, created the five Signet Spheres to lessen the magical strength of the Crystal Sphere. In turn, Melbu created the Divine Moon Objects in case he ever wanted to destroy the Spheres. After Melbu's final battle with Zieg at Kadessa the Crystal Sphere shattered, releasing the soul of the Virage Embryo.

Rose, after the death of her fellow dragoons, some how came in contact with Charle. Charle would explain that with the release of the Virage Embryo's soul, a child would be born every 108 years and try to find a way back to its body: the Moon That Never Sets. It would be necessary for Rose to slay the one they dubbed the Moon Child and those that had come in contact with it in an endeavor to stop the birth of the God of Destruction and the end of the world. To help her complete this task Charle gave her a magical choker that would stop her from aging and allow her to continue this task for as long as needed

When the new dragoons arrive at Charle's home she is waiting for them. She talks to them about the Signet Sphere, Ziegs motives, the Moon child, and what to do next. She tells them that if they are able to stop Zieg from destroying at least one of the Signets, they will have stopped his plan of bring the birth of the God of Destruction.

Retrieved from "https://legendofdragoon.fandom.com/wiki/Charle_Frahma?oldid=23195"
Community content is available under CC-BY-SA unless otherwise noted.