The Legend of Dragoon Wiki
Register
Don't have an account?
Sign In
Advertisement
in: Article stubs, Location, Disc 2,
and 2 more 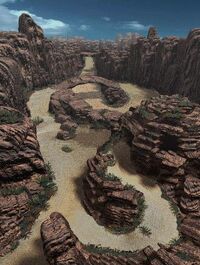 The Barrens(荒れ地, Arechi) is an area of rocky, sand-strewn canyons and rock outcroppings north-west of Fletz. An exit to the right of the screen leads north to the exit to Donau; the left screen exit, east to the Valley of Corrupted Gravity.

The claw-handed Mappi and other similarly armed members of the Gehrich Gang attack the party here; due to their speed and surprise attack, control of the Red Dragoon Spirit is temporarily lost.

All the treasure in the Barrens is visible on-screen; only the entrances are hidden. Turning on the map markers will make it easy.

Community content is available under CC-BY-SA unless otherwise noted.
Advertisement