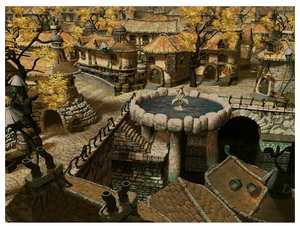 Bale (王都ベール, Ōto Bēru, "Imperial City Bel") is the capital of Basil, the northern area of the country of Serdio. Bale is the capital of Kingdom of Basil, the other capital in Serdio being Kazas, the capital of Imperial Sandora. Serdio is not split in two merely by geography: Basil and Serdio have been at war, hot and cold, for 20 years, since then-Prince Doel murdered his brother King Carlo. King Albert and his advisor Minister Noish hold court, and war council, in Indels Castle in Bale. Bale is located in the northmost part of Serdio while Kazas is located in the southmost part of Serdio.

The city of Bale resembles a city during the renaissance. It is indeed old as Bale was said to have been the central capital since the Age of Serdio. The roofs are topped with what appears to be clay tiles while the base of building are often composed of stone. The entire city has a "wave" design too, which is most evident in the metal workings of the city that bend or curve in an unusual fashion. Bale's look is in contrast with the look of Kazas which is more industrial. Like Fletz in Tiberoa, town of Bale is surrounded by rivers. The trees are golden and auburn as though it were autumn.

Bale is the first town visited by Dart to have all four town features - Item Shop, Weapon Shop, Clinic and Hotel. Its hotel is also the cheapest, costing only 10G per stay.

There is a underground jetty under Indels Castle. It can only be accessed via underground waterway and to do this Dart has to buy Good Spirits from the nearby inn and give it to Dran, who is drunk and blocking the way. The waterway is located under the big fountain in the main street.

Tightrope walking the ceiling joist (OK so it could be a strutting beam, what do I know about carpentry nomenclature), if all else fails and the player must simply hit X repeatedly, they will probably be hitting it at the right times to prevent Dart wobbling off and losing the Healing Breeze.

Bale is the first of the temporary locations for Martel, who is looking for Stardust to cure her child.

When Dart and company arrive at Bale, Lavitz says that they need to go see King Albert first and tell him about Feyrbrand and the Imperials' advance into Basil. Once at Indels Castle Dart asks if Shana can stay at the castle out of harms way. Albert explains that it is not possible because of the dragon. Dart retracts his request and asks Minister Noish about the Black Monster. Noish explains that most if not all information about the Black monster was destroyed during a fire. Instead he tells them about the Dragon Campaign that took place 11,000 years ago. A soldier walks in and tells Albert that the war meeting is ready to begin. Albert suggests that Dart and Shana enjoy the veiw in the adjacent room. Shana hastely excuses herself and Dart does the same to follow her.

On the veranda Dart and Shana wonder how Seles is. Lavitz enters and explains that the town is well and they will be able to rebuild once the war is over. He then reveals that Sandora is readying itself to attack Hoax using the dragon and he plans to head there to maintain the battle line. Dart then becomes determined to go with Lavitz to end the war before carrying on with his journey. Shana also says she wants to go. Lavitz says that Bale has shops where they can gather supplies and stay at his mother's home.

At Lavitz's home his mother confuses Shana for Lavitz's new bride. He quickly explains that she is Darts sweetheart. Saddened, Lavitz's mother tells Dart that he needs to speak up next time and tells Lavitz that he needs to find a girl like Shana. She continues to ask if he would be staying for the day but tells him to at least have lunch if he couldn't stay. Shana offers her help in making lunch. While the women make lunch Lavitz gives Dart a tour of his home. When they make it to the library Lavitz shows Dart his "treasure". He moves the ladder to the window and invites Dart to the roof. On the roof is a perfect view of Indels Castle. Seeing this view every day Lavitz grew up hoping to be an admired knight like his father. Lavitz compares his desire to protect his country to that of Dart's desire to protect Shana. Some one calls from below and tells them that the food is ready. When they finish their meal they prepare to go to Hoax.

When the party reaches Tiberoa, they can return to Bale. A lot of people in Lavitz's hometown will discuss him as they have heard about his death. If you go to his old house to visit his mother, you will find out she is living with the refugee family that the company met at the Prairie. Depending on whether Lavitz talked to the refugees, and at different points in the story, there are different outcomes for Lavitz' mother and the family. One response is, at one point, one of them saying that even though Lavitz is gone, Dart is still considered family.

There is no need to buy any of the Armor or Weapons here, except the Sallet. Two is good: they're cheap. One is fine: 10% Accuracy isn't a big deal when your base is 100%. But there will be two male Dragoons by the time you can buy an Armet in Kazas, so the extra Magic attack would see some use. And there is no other male helm that gives Accuracy. If you are running a Low Level Challenge that isn't also Initial Equipment, you probably want three.

Retrieved from "https://legendofdragoon.fandom.com/wiki/Bale?oldid=22501"
Community content is available under CC-BY-SA unless otherwise noted.